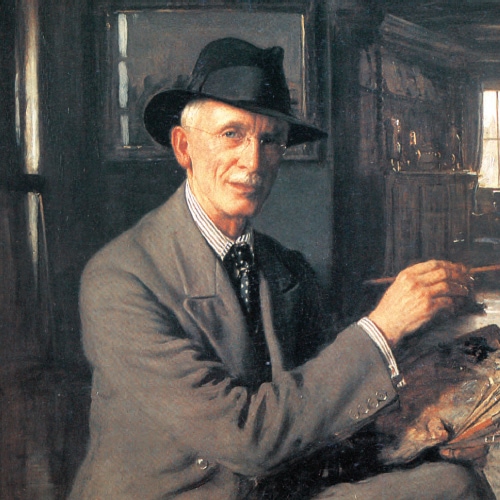 In his teens he won the Queen’s medal in a competition open to the whole of England. The still life painting displayed the maturity and technique of an artist 20 years his senior and his skills were never to diminish. They bloomed throughout his years of training at the famed Lincoln College of Art, under the tutelage of AG Webster, where he won a scholarship to the Royal Academy of Art in Antwerp to study the Netherlandish Old Masters. He excelled, as seen by some brilliant examples, within the book.

From Antwerp he progressed to the Academé Julian in Paris in 1892, he developed in stature under the leading tutors of his day. Fully embracing a French way of life, he successfully exhibited at the Salon des Beaux Arts in Paris for many years. He met and was influenced by a number of Impressionists and other moderns, only absorbing from them the methods that would enhance his own techniques.

Elwell torn between French and English

Gladdened by his ready acceptance at the Paris Salon, he was however out of harmony with the Victorian moralism and semi-religious sentiment of the Royal Academy, where he felt his future should lie. He decided to try to break down this barrier, and embarked upon a special Royal Academy piece, giving it an age-old theme, flooding it with light and colour in the French mode, but set within a very English context. It was a sensation at the Royal Academy in 1913, and this picture is still revered today, as a precursor of the style of generous realism which was to continue throughout his long and successful career (Plate 127).

A hard road to the top

The Elwell story is one of hardships and triumphs. His was no easy path. The son of a woodcarver in a small market town, he was to become one of England’s most distinguished and popular Royal Academicians, a man loved and admired by all who met him.

The biography was written from direct personal interviews with close relatives and friends, members of the Elwell household, numerous models and scores of acquaintances, all of whom were bubbling over with enthusiasm to recall their own anecdotes of Fred Elwell RA.

The conclusion of four years work

Share in a joyous celebration of one of England’s most popular Royal Academicians, exactly 100 years to the day he married the exceptionally talented artist Mary Dawson Holmes. Together, they exhibited at the Royal Academy.

This reappraisal, twenty-one years after the first edition, embraces his genius afresh and displays a versatility which surprises. Included in this luxurious, thread-sewn, hardback volume of 216 pages is a wealth of new material and pictures seldom seen before. The book contains a Gallery of more than 140 full-colour large illustrations, with over 90 scattered elsewhere within the text. Watch out for other gifted members of the Elwell family too.

View a small selection of plates from the book →